Serious giving can be fun

Growing up in Malaysia, Kent Kwan’s family had a longstanding tradition of helping others. So when Kent achieved financial security as an adult, it was no surprise that his parents’ first response was to ask “have you thought about how you can help others?”.

“My parents didn’t talk openly about it, but there was a strong drive to help others less fortunate. To this day, they have a strong community spirit, and contributing to society is an important part of life. The important thing I learnt was that materialistic success is not the only thing to strive for, and that it’s up to those who can to help those who need it.” 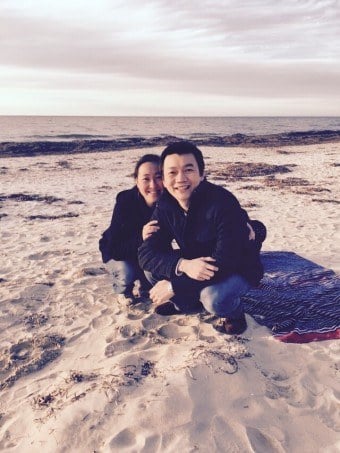 "We know that giving is serious, but we also want it to be fun."

Kent and May Ann Kwan

Kent’s wife, May Ann, also inherited strong values about giving back. Both Kent and May Ann had witnessed the hardship that many families faced where they grew up, and considered themselves lucky to have more fortunate lives than most. They talked of one day establishing a family foundation, and were eager to move ahead with their plans, despite being younger than many philanthropists. When an opportunity arose a few years ago, they could see no reason to wait.

The couple established The Jam and Jelly Foundation, a private ancillary fund (PAF), in 2014.  The name reflects the family’s joyous attitude to giving. “We know that giving is serious, but we also want it to be fun. Jam and Jelly has an uplifting sensibility about it.”

The Foundation focuses on the health and wellbeing of children. Kent and May Ann had only recently established the Foundation when, in mid -014, one of their children was diagnosed with a rare disease. Their young daughter, Lauren, developed Kawasaki disease, an illness that, if not treated within 10 days, is life-threatening. “We were incredibly fortunate that Lauren was diagnosed and treated quickly, as there’s no diagnostic test for this disease. The hospital who treated her were amazing, and she received such great care.”

A few months later when they had to choose the Jam and Jelly Foundation’s first grant recipients, Kent and May Ann made an easy decision. “We made a donation to the hospital that looked after Lauren, as a way of saying thank-you.”

The couple then went one step further. Kent did a Google search to see if anyone in Australia was researching Kawasaki disease. As luck would have it there was one person, and Kent decided to call him out of the blue. “I think he may have been a little surprised to receive our call. He told us all about his research, and we knew immediately that we wanted to support the project (via the Murdoch Children’s Research Institute). This has now become a key goal for the Foundation to help fund research that one day might solve the mysteries of Kawasaki Disease.”

Another project Kent and May Ann are enthusiastic about is the Sensorium Theatre in WA. “It’s an immersive theatre experience for children with special needs.  I met the founder at an event, and I immediately thought it lined up with what we are trying to achieve. We liked that it has therapeutic value, but also the joyful aspect to it. I went to one of their shows and heard some parents say that this is one of the rare occasions they see their children smile.”

Passionate, innovative people are also a key to the projects that the Foundation supports. “We want to support people who will have a go and do something different.” Kent and May Ann have been especially inspired by one particular project that supports schooling in Asia. “Classroom of Hope is run by Duncan Ward, who is very passionate about education. He works with local communities in Asia, particularly in Cambodia, to support primary schools that don’t even have the basics, things we take for granted. They need small things like toilets, or new roofs. Classroom of Hope gets them up to ‘UN Child Friendly School’ status, which is a standard of minimum requirements. The organisation’s reporting is also very good, so we can follow the project’s progress and see how the funds are being utilised.”

Kent and May Ann see collaboration with other philanthropists as a strong possibility, and are already thinking about ways to work with other PAF holders, particularly in relation to autism research.

In the long-term, they hope that their two children will take an interest in the work of the Jam and Jelly Foundation, and come to enjoy the rewards of giving as much as they do.  And they have no regrets about taking the leap into philanthropy. “You don’t have to wait until a certain age or stage of life to do this. There’s a perception that it’s something you do perhaps when you’re older, but it doesn’t need to be true. I just wish we could have started earlier!”