When they established their private ancillary fund (PAF) in 2006, Alan and Barbara Bagnall couldn’t have imagined how their chosen charities would become such an important and integral part of their lives.

Prior to establishing their PAF, the Bagnalls had been donating to charities informally. It was Barbara’s idea to formalise their giving, and it was their stockbroker who told the couple about private ancillary funds (PAFs). They are now passionate advocates for PAFs, as Alan explains. “PAFs are one of the greatest secrets in Australia, but they haven’t reached their full potential as yet. They need to be much more widely promoted, so that people know they exist.”

Alan and Barbara established the Bagnall Foundation in 2006. They remember that theirs was number 455 of the more than 1,500 PAFs that have now been established in Australia. 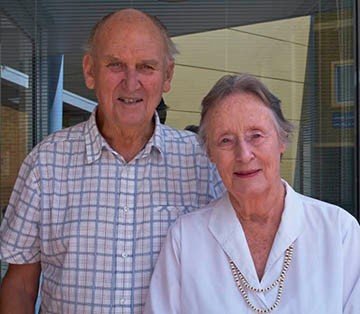 "Try to get involved with the charities, don’t stay at arms-length. Write to the CEO and introduce yourself, and get out and see the charities. Things will start to happen. It enriches your life."

The couple’s overall aim for the Bagnall Foundation is to help disadvantaged people, especially youth. In most cases, it is their personal experiences that have informed their grantmaking decisions, along with some due diligence to help them make the final choices.  From the outset the Bagnalls wanted to get involved with the charities. This hands-on approach would turn out to be the start of a series of rewarding relationships between the Bagnalls and the organisations.

Alan Bagnall is a retired statistician, and a former head of the Australian Bureau of Statistics, where he and Barbara met, 64 years ago. The first thing Alan and Barbara wanted to do, after establishing their PAF, was to visit the charities that interested them. Without hesitation, Alan contacted the CEO of each organisation, and asked to visit their head office. “The calibre of the people in these organisations is important to us.” He recalls being very candid when speaking with the CEOs. “I told them that I wanted to check out the furniture in the office and the cars in the carpark!”

Those initial visits made the Bagnalls’ decisions much clearer. “It gives you a chance to see how the organisation is run, and the style of the operation. The charities welcomed us and were keen to talk about their work.”

The Bagnalls chose to support a small number of charities, and have stuck closely to those organisations, increasing their commitment over time.

They both enjoy personal, regular contact with each organisation, going to events, visiting sites, touring offices, and attending program launches whenever they can. Each engagement is an opportunity to learn more about the work of the organisations they support, meet some of the beneficiaries, see the impact of the programs, and to grow their relationship with the charities and their key people.

One of Alan and Barbara’s strongest commitments is to the Butterfly Foundation, an organisation that provides support for eating disorders, an issue that is close to their hearts. The Bagnalls adopted two children, and their daughter, Kate, passed away in late 2016, aged 48. Kate battled with an eating disorder from the age of 15.

Through their own experience of struggling to find help for Kate over many years, Alan and Barbara saw how little support there was for both patients and carers, and were frustrated at the lack of understanding about eating disorders, both amongst the medical staff and the community. “The Butterfly Foundation do great work, and have a wonderful CEO, Christine Morgan. It’s very difficult work because eating disorders are not very well understood, so it hasn’t had much government funding in the past, until now. This year, for the first time, eating disorders were an item listed in the federal budget.”

Their daughter also loved dogs, and so Barbara is a great supporter of the RSPCA. “Dogs were a great comfort to Kate over the years.” The Guide Dogs is another regular grant recipient, and the Bagnalls have attended the organisation’s puppy graduation ceremonies a number of times.

Youth disadvantage is an important issue for Alan and Barbara, who also lost their son ten years ago, after a battle with drug addiction. Consequently, they support Youth Off The Streets and Mission Australia. Alan also has a particular passion for the Smith Family’s education assistance program, and sponsors a number of students to help with their education costs (currently 6, but at one time they sponsored 9). He enjoys keeping an eye on their school progress, and quietly encourages the students along the way, through letters. “At the beginning of each year I send each of them a letter, and a voucher, so they can buy a few things they need at the beginning of the school year. And I write on their birthdays too. They often write back and let us know how they are going.”

For Alan and Barbara, engaging with the charities is partly about seeing the impact of their donations, and the rewards that come with that. It’s also about understanding how the charities use the money. “We don’t ask for the money to go towards specific projects with each charity, but we like to see that it is being put to good use. We also only support organisations working in Australia. We both feel that there is enough disadvantage here. And we tend to avoid charities that are large, bureaucratic organisations.”

And their advice for others just starting out with their PAF? “When you’re setting up the board of the PAF you want it to feel like a family. I would suggest getting someone like your accountant or share broker onto the board. And try to get involved with the charities, don’t stay at arms-length. Write to the CEO and introduce yourself, and get out and see the charities. Things will start to happen. It enriches your life.”