Home Articles Hands-on philanthropy and the value of getting involved

Hands-on philanthropy and the value of getting involved

When Rod Unsworth speaks about his family’s private ancillary fund (PAF), there are two words you’ll hear repeated often: getting involved. For Rod the key to making the most of his family’s philanthropic experience is being hands-on. It’s all about engaging with the causes, and finding ways to offer further assistance and resources beyond financial support.

This has become an integral part of the Unsworth’s approach to giving, as Rod explains. “We look for active engagement where we feel that we can make a real difference and offer tangible help. We get so much more out of it than if we just supported with money. You don’t get nearly the satisfaction as you do if you have an active dialogue with the organisation. Actually, I don’t know how you do it if you don’t get involved!”

Rod and his wife Darrall established their PAF, The Unsworth Foundation, in 2014. Prior to this the family had a more informal approach to giving, supporting various causes, mostly through involvement with charitable events. They also chose to support causes about which they felt a personal connection. 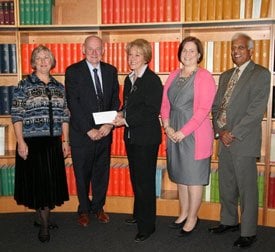 "You don’t get nearly the satisfaction as you do if you have an active dialogue with the organisation. Actually, I don’t know how you do it if you don’t get involved!"

Darrall Unsworth has been partially deaf since childhood, as a consequence of contracting mumps at the age of 11, and for many years the Unsworths have been loyal supporters of the Royal Institute for Deaf and Blind Children (RIDBC). Since establishing their PAF, the Unsworths have grown their relationship with the RIDBC, visiting the organisation’s premises, and connecting with the executive. “We recently held one of our PAF Board meetings at the RIDBC offices, and afterwards we had a tour of the North Rocks (Sydney) premises. We also had a chance to discuss their strategic planning. Getting to know an organisation up close allows you to better understand what they’re trying to achieve.”

This closer relationship with the RIDBC has already had a positive outcome. “They wanted to put outreach centres in regional areas, and so we decided to fund some of the equipment in the new hearing testing centre in Port Macquarie. Their vision became our vision.”

Rod and Darrall have three adult children, two sons and one daughter. Their sons live in Perth and Paris, so they keep them informed of the work with their PAF. Their daughter, Jessica, lives closer to home and is involved directly with the Foundation’s work and the decisions about grantmaking.  The family chose to support medical research into Prader Willi Syndrome after a friend of Jessica’s had a child with the syndrome. This rare illness results in a range of health issues, the main one being the child is unable to regulate appetite, and they often become obese and can die young. The Unsworth Foundation has funded medical research into the illness via the Garvan Institute.

The grant is also of interest to Rod, who has a medical background as a pharmacist and has worked with pharmaceutical companies at an executive level for many years. Again, the family have taken their engagement that one step further, and have visited the Garvan Institute and taken a tour of the premises. Rod finds his background is also helpful when talking with the organisation’s staff about the illness and the research work.

Like her parents, Jessica enjoys a deeper engagement with the causes the family supports, and has become very connected with Coast Shelter, which offers assistance to families experiencing domestic violence on the Central Coast of NSW. The family has a holiday house in the area, where they spend a great deal of time, and felt it was a chance to help an organisation in their local community. Financially, the Unsworths have committed to supporting Coast Shelter over a three year period, with the grants from their PAF funding a triage person to assist families moving into accommodation. However, Jessica decided she wanted to do more, and reached out to the organisation to ask if there was anything practical the children needed.

She was soon enlisting the help of her own children’s school, and gathered surplus uniform shop supplies such as bags, hats, and swimmers to donate. The CEO and team at Coast Shelter were delighted, as Rod explains. “They went on to ask us for other things they needed, which we were very happy to provide. Jessica has now organised toys, books, and food as well. We’ve helped where we can.”

The Unsworths’ hands-on approach takes time, but Rod feels the rewards are there. “I would encourage others (with PAFs) to think about not just giving money, but getting involved. It gives you a chance to get to know an organisation, which is very important because you then know if they’re adding value to the cause. It also gives you a sense of ownership to what you’re contributing.”

And Rod’s long-term view for the Unsworth Foundation? “It’s about the kids – and grandkids. I have six grandchildren who are severely advantaged! I don’t think of legacy in terms of public recognition, it’s more about transferring values and a sense of being part of a community and having broader responsibilities.”