Even small amounts of giving can have an impact

When Este Darin-Cooper was growing up her parents often took her to see a play, or to visit an art exhibition. As an adult Este now appreciates how lucky she was to have that access to cultural experiences and what a positive impact the arts can have on our lives.

“The arts were an important part of growing up for me. As I got older, I began to see the impact a play or an exhibition could have, how they allow us to share stories, stories that can educate, help to raise awareness of issues, and give us insights into other people’s lives and perspectives.”

Este’s mother, Jennifer Darin, shares her daughter’s passion for the arts, and when, in 2014, they established a private ancillary fund (PAF), the Darin Cooper Foundation, the arts became a key element of their grantmaking strategy. 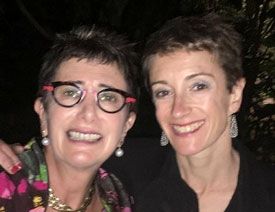 "Even small amounts can have an impact. It’s not all about the amount you’re giving, it’s about deciding that this is something that you’re going to do now and, in the future."

As Este explains, they divide their grantmaking between the arts, as well as organisations that address social disadvantage. Both Este and Jennifer have particular projects and organisations that they’re keen to support. “We talk about who we’d like to support and why, and make the final decisions together. We introduce each other to different organisations and different experiences. It’s a bit of an organic process, but still strategic, and we find that we give each other confidence and learn so much from each other.”

Like many families who establish a PAF Jennifer had previously been giving to organisations informally. “Last year our financial adviser suggested that setting up a PAF would be a good idea, and introduced us to APS. The beauty of having the foundation is that it allows us to do the giving while we’re alive. So we get to see the impact and enjoy the giving. It’s also long-term, which gives the organisations we support the ability to plan, and it’s financially more strategic. As a family it’s also enabled us to have a conversation about what we want to do with our giving and talk about the idea of legacy.”

The organisations that the Darin Cooper Foundation supports are diverse. In the social disadvantage area they chose education-focussed projects within some well-established charities such as The Smith Family, The Salvation Army, and Royal Far West.

In selecting arts projects, Este and Jennifer are supporting a range of organisations, both large and small. Este explains, “we’re interested in fostering arts education, and that’s the focus of our grants to Bell Shakespeare, Musica Viva, and the Australian Chamber Orchestra (ACO), who all run large education programs for children across the country.” Jennifer adds, “we’re also a Medici Patron of the ACO and support the double bass player (this is our biggest single grant), and both my husband and I are members of the Amadeus Society with Musica Viva via the Foundation.”

Small arts organisations don’t miss out either, as Este explains. “We also like to support some organisations who otherwise might be overlooked for philanthropic support. For example, we love Griffin Theatre, because they’re producing new works from local writers. They tell uniquely Australian stories, and we like supporting new writing. For the same reason, we support Playwriting Australia, in particular their Visionaries program which also funds new Australian plays. We are also interested in arts organisations based outside of inner city and that have a community building aspect, such as Powerhouse Youth Theatre and Urban Theatre Projects. The idea with our grantmaking here is to start small to see if an organisation is a good fit, and then grow the support over time.”

Este and Jennifer like to be involved with the arts organisations, and enjoy meeting other like-minded funders who share their passion, some who have become close friends. They also feel that the experience has had a positive impact on their relationship as mother and daughter.

Their support of local theatre companies has even led to an opportunity to learn more about how a theatre production is developed, as Este explains. “We’ve had the chance to go behind the scenes and see the creative process in action. We’ve been to some rehearsals, spoken with the directors and the actors. It’s amazing to see how it all comes together, to see a play come to life. We’ve loved that.”

Although the Darin Cooper Foundation is only 18 months old, both Jennifer and Este feel they have already learnt some important lessons. Este feels that the grantmaking doesn’t have to be big. “Even small amounts can have an impact. It’s not all about the amount you’re giving, it’s about deciding that this is something that you’re going to do now and, in the future.”