When Robin Murphy OAM gets behind a project, others follow. The owner of Queensland based construction company Canstruct Pty Ltd likes to collaborate, and knows the value of taking a strategic approach to business – and philanthropy. “The important thing for me is being a catalyst. Things can get a life of their own if you just give them a push.”

An active member of Rotary for 50 years, Robin is used to bringing together individuals and groups to rally behind a good cause. When he decided last year to establish a private ancillary fund (PAF), the Murphy Family Foundation, it was a natural extension of Robin’s life-long commitment to backing worthwhile projects.

Establishing the Murphy Family Foundation was also an opportunity for Robin to have his family involved in the work of the foundation. Robin and his wife Margaret have five adult children, and all are actively engaged in the running of the PAF. “My family haven’t ever been part of my Rotary work, so I thought this would be good chance for the family to experience working with charities, which is so rewarding in lots of ways. They had a taste of it when we did a major project with the Endeavour Foundation in 2013 which was a real win-win, and last year we supported 10 different charities.” 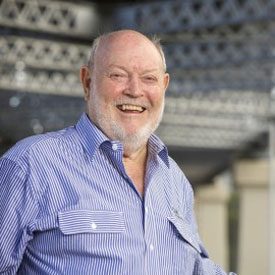 "The important thing for me is being a catalyst. Things can get a life of their own if you just give them a push."

The first major project that the Murphy Family Foundation is supporting is in their home state, in Far North Queensland. “I have a particular interest in building in remote areas. Our company specialises in building cyclone safe constructions, we’ve built between 300-400 houses in Indigenous communities over the years. We built some houses in the Lockhart River area, and I went up to have a look. I could see they were in dire straits.”

Lockhart River, with a population of between 700-800 people, is one of the most disadvantaged communities in Australia, with many of its families on welfare. It’s also very isolated, a good day and a half’s drive from Cairns, and for 3-4 months of the year during the wet season it is completely cut off, except for one daily flight out (at a cost of $1,100 single fare to Cairns).

Robin heard about a small not-for-profit at Lockhart River that had impressive plans to improve early learning and parenting in the community, but had been knocked back for government funding. Denise Hagan, Founder and CEO of The Puuya Foundation (Puuya means life force), worked with community leaders to develop an idea for a community centre that would bring families together, and would also help to empower the local community. As Denise explains, “we had a desperate need, but we also wanted a place that was owned and run by the local community. They would be in charge, making their own decisions, that sense of ownership was important.”

Denise knew funding would be difficult, so it was initially to be a small-scale project and one that would take up to 10 years to complete – until Robin came on board. ”When Robin first came to help us it was for funding for a small building. But then we decided to go back to government, and we were able to leverage that grant [from the Murphys] to get significantly more money. It helped us to present the case too. It’s the first time that’s been done in Queensland, a partnership like this between philanthropy and government.”

As well as the grant, Robin (pictured above with Wayne Butcher, Mayor of Lockhart River) and his company also provided in-kind support, helping with drawings, planning, and administration. The project has now grown to a $3 million community centre that will be a valuable space for families to come together, for children and parents to attend early learning services, and for health and clinical support workers to operate from. “There will also be a small bus for transport, and four local staff will run the early learning program. Robin is results focused and really understood what we were trying to do. It’s about building capacity in the community, and the social impact is going to be generational.”

For Robin, the outcome is ideal. “Collaborating and amplifying impact is exactly what we’re trying to do. This model is also one that they (the Puuya Foundation) can then export to other communities.” The Lockhart River project is due for completion at the end of this year.