For some years Rosemary Nixon and her husband Steve Ashton had thought about being involved in philanthropy, but the idea was still in its infancy when, in 2015, Steve was diagnosed with mesothelioma.

“We had always wanted to do something, and then Steve’s diagnosis came out of the blue. As awful as that was, after the shock of the news subsided, we began to think about what we might do, how we could put something in place while Steve was still with us.

The couple had both built successful careers, Rosemary as a dermatologist and Steve as an architect, but neither knew much about where to start with their philanthropy. So, they turned to their friend, Robyn Charlwood, a philanthropy advisor, and she directed them to APS. Learning about private ancillary funds (PAFs) and public ancillary funds (PuAFs), the couple decided that a sub-fund in a public fund was the most suitable option. “We liked the public option, there was less administration, it could be established very quickly, and it was an opportunity for others to contribute to it if they wanted. APS made it very easy for us.” 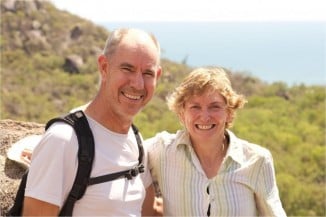 "We decided that our main priority would be to support the professional development of young architects. We also wanted to support medical research and environmental causes."

The APS Foundation is a public ancillary fund (PuAF), which is a communal philanthropic structure that allows people to establish a named sub-fund. With similar benefits to a private ancillary fund (PAF), the investments of the APS Foundation, however, are managed by APS, leaving the client to focus solely on choosing the charities they wish to support. Steve and Rosemary decided to name their sub-fund the Ashton-Nixon Bequest. “We liked the idea of it being a legacy, something that would honour Steve and his work, and continue the impact that he’d made throughout his career in architecture.”

Once the sub-fund was established, Rosemary and Steve began to discuss the focus of their giving. Their conversation turned to what they were passionate about and where they could make a difference. “Steve always thought that the business skills he developed in his Graduate Diploma of Business Administration at Swinburne contributed greatly to the success of his architectural firm. So, we decided that our main priority would be to support the professional development of young architects. We also wanted to support medical research and environmental causes”.

Steve Ashton was a much loved and highly respected architect. He co-founded Melbourne firm Ashton Raggatt McDougall (ARM Architecture), which over thirty years became one of Australia’s most significant and awarded architectural practices. It is best known for the Melbourne Recital Centre and the Melbourne Theatre Company Sumner Theatre; Perth Arena, the National Museum of Australia, and extensive renovations of the Melbourne Shrine of Remembrance, Hamer Hall and RMIT’s Storey Hall.  Steve also mentored many young architects throughout his career, and was very active in the Australian Institute of Architects (AIA). In 2017, he and his partners were awarded the AIA’s highest honour, the Gold Medal. And in an amazing coincidence, both Steve and Rosemary were awarded the Order of Australia (AM) for their respective contributions, in June 2017.

Steve had another passion, car rallying. He had a lifetime love of the sport, and greatly contributed to its governance, as well as being a competitor for over 40 years. He was awarded life membership of the Confederation of Australian Motorsports (CAMS) in 2016.  Unfortunately, it was through rallying in the 1970s that he had been exposed to asbestos brake pads. However, it was also where he and Rosemary met in 1979, when he invited Rosemary to navigate for him. They married in 1985, and had two daughters, Louisa and Kate, who are now in their twenties. After a prolonged battle with mesothelioma Steve passed away in June 2016.

In 2017, the inaugural Steve Ashton scholarship was awarded. Rosemary put together an advisory committee to assist with the choice, comprised of family members and external industry experts. The purpose of the scholarship is to enable qualified architects to gain skills to aid their professional development, enhancing the practice of architecture in Victoria. “We chose a wonderful young woman, Amelia Borg, who is a cofounder of her own architectural firm. The scholarship ($28,000) will help support her while she studies for her MBA at Melbourne University.” In the first year of grants, the Ashton-Nixon Bequest also supported the Olivia Newtown-John Cancer Research Institute in Melbourne, where Steve’s oncologist has a research team. The environmental grant went to the Bob Brown Foundation.

It’s reassuring for Rosemary to know that Steve has left a legacy, in addition to his many buildings, that is still having a positive influence beyond his life. “It’s great that Steve can continue to make an impact on areas that were important to him in his life. And it’s also extremely helpful to me to know that that’s happening.”